The slum creates its own currency and what we can learn from it.

In the town of Bangladesh, Kenya local residents have taken on the initiative of creating their own local currency. Bangladesh, not to be confused with the southeast Asian country, is slum located outside of the coastal city of Mombasa. The locals had worked with American Will Ruddick’s local development organization, Koru-Kenya, to create a complementary currency. A complementary currency is in essence a voucher used to support or compliment another currency. It is limited to a single locality, and intended for communities that do not have access to the financial capital that many enjoy. It critiques spending habits and helps money to circulate in areas deemed destitute. 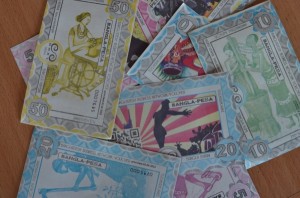 Bangla-Pesa, is the name of the currency created by local Kenyans and Koru-Kenya. Bangla coming from Bangladesh and pesa being the Swahili word for money. The idea is not new and has been previously applied in three slums in the area of Kongowea. It is also a relatively simple concept, over 100 small business owners agreed to lend each other 400 shillings (roughly $4.50 U.S dollars) in the form of the Bangla-Pesa in which half is directed towards spending on each others product and the other half is put towards the creation of public projects. The community provides the sole backing and the currency is insured by a system guarantors not affiliated with a development agency or government. The community is in complete control of its finances that are still linked and exchangeable for national currency. Since being put into effect on May 2013, sales have risen 22%. The purchases were for goods that would have previously gone to waste due to the consumer’s lack of money. Local Kenyans were able to do business in Bangla-Pesa while being able to save their shillings. It is similar to a no interest credit line. It is allotted to registered members only, and those who use the vouchers do so when they are unable to spend their shillings. When shillings are available the bangla pesa vouchers are exchanged. It also presents a means of replacing the barter economy, with a more efficient currency system that is preferable to the growth of an economy. It maximizes the potential of the member businesses. It is a credit system for the slums and a catalyst for economic cohesion. 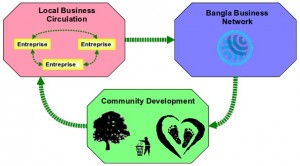 The cycle of local currency

Despite increase in business brought by the new currency, the Kenyan government was dismayed and took measures to cease operations ranging from accusing the Bangla-Pesa as being tied to local terrorist groups to a forgery charge resulting in the arrest of many members using the vouchers. As one can imagine, local governments may not look too highly on a system that creates its own currency without connection to the government. However, later in 2013 Bangla-Pesa was relaunched with partnership with the Kenyan government and has received requests from government representatives to replicate the vouchers in their respective areas. In many low income countries there is a particular kind of creativity that critiques capitalism and puts new ideas into motion. It was born in response to the government’s inability or unwillingness to work towards social progress. Many low income countries also find themselves less burdened with bureaucratic red tape that dictates the way people conduct business. For example, haggling or bartering are more common sights. As a result, those in high income countries where business is defined by a certain set of rules and rituals are pressured by the status quo to think inside the box when it comes to combating issues such as poverty. It is for this reason that countries such as the United States, can learn from the strategies used to combat poverty in rising developing countries. The idea of complementary currency has already been reapplied in the United States and Canada. Berkshares, Ithaca Hours, and the Toronto Dollar are all different examples. However, the areas in which these currencies were applied didn’t reflect extreme poverty. Poverty stricken areas of America’s big cities could benefit from such an initiative. The main difference in the Bangla-Pesa in Kenya versus a payment systems in America is the access to credit, and electronic payment. With access to credit cards local devotion to their complementary currency may dwindle since, it’s an easy source of credit. However a local currency stays within its locality and is designed to help its local economy. The complementary currency also holds no interest rate, and its efficiency boils down to one’s devotion to local business. In places such as Bangladesh, in a slum in Kenya it may be more difficult for one to make purchases outside of their locality than it is for someone living the American ghetto. Some people prefer to use their currency outside of their locality for better quality products. This is especially the case in very poor areas, where goods for sale will be of lower quality. Higher quality products in wealthier areas will also cost more. Local currencies are vouchers designed for the very poor, those whose priorities lean towards saving money over higher quality. This type of currency is designed for places where the lack of a national currency is so low that it halts business almost entirely. In addition to Kenya it was applied in Argentina after their financial crisis in the 90’s which resulted in capital flight from the country and low confidence in the peso from investors. When the national currency became unavailable , communities simply began issuing their own currency in the form of paper slips that ultimately increased local liquidity. Complementary currency for the very poor in high income countries can be a kind of micro finance that involves no interest credit that can be used for the purchase of day to day goods. Detroit has already moved toward local currencies with its use of the Detroit Cheers, a voucher in only 3 dollar denominations, whose backing money is held in reserve. There is also the prospect of making mobile currency and payments accessible via mobile phones which Koru has done, and even the marriage between local currency and crypto currencies such as bitcoin, litecoin, and nova coin holds potential. The technological aspect of local currency is however a secondary priority to giving people the financial capital they need. 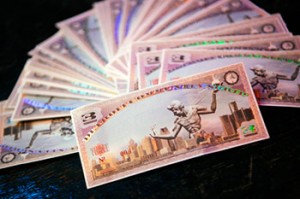 The lesson to be learned from local currencies around the world is fiat money is nothing but a series of paper bills that we add value and faith to with backing by the government. Areas in America that have seen government neglect, a lack of investment and little financial capital in the hands of the people have the potential to create their own wealth in the form of these local vouchers. While they don’t promise to turn a slum into a utopia overnight, they are a means for the world’s poor to create better lives for themselves.