How the poor turn waste into fortune in Kenya, and its application in the U.S

As societies grow and consume, so too does the amount of electronic waste. Electronic waste is discarded computers, phones, televisions and other electronic items no longer deemed fit for use. Although used in homes around the world, it ultimately finds its way to a few common destinations. The coasts of Ghana, Nigeria, India, Pakistan and China are known to be the recipients of much of the world’s e-waste, but millions of tons is also sent to other nations in South East Asia and along the coast of East Africa like Kenya and Somalia. Much of this dumping is illegal and disguised in the form of usable, secondhand electronics that are still good for use. In the antebellum American south, slaves and the impoverished would collect scraps of food from their masters. These were often the unwanted pieces. From these scraps, delicacies were made, and enjoyed by rich and poor alike. The wealth of recycling has always been an industry to play on the minds of the optimistic and entrepreneurial.

Waste collection and recycling is a multi-billion dollar industry. Recycling not only keeps the world clean, it boosts the economy. The United States and many other countries export a portion of their recyclable waste to recipient countries like China. China is the world’s leading producer of metal partly because it recycles the world’s waste, most notably its electronic waste and harvests the precious metals inside. The United States assumed the same role in its earlier years. Before it achieved the status of super power and Andrew Carnegie revolutionized the steel industry, the United States was a big importer of steel scrap from Europe and used recycled steel to build its railways.

Kibera, the largest slum in Kenya is home to roughly one million who live on less than minimum wage. Many of these people are exposed to electronic waste that has been improperly disposed of. Exposure to high amounts of harmful chemicals or metals such as mercury or cadmium brought by electronic waste lead to effects such as cancer, diabetes, impaired cognitive functions and damaged organs. Workers use acid to etch metals from circuit boards, polluting the environment with heavy metals, and burn the plastic covering off of wires to get at the copper underneath. The exposure and the rate in which e-waste is brought is only augmented as the technological sector grows. The amount of electronic waste coming to Africa alone grows by 20% each year. Entrepreneurs are looking upon the mountains of electronic waste and seeing a blessing in disguise. Every one million phones can yield 9 tons of copper ($44,640) , 24 kg of gold ($843,279.84) and 250 kg ($120,002.05) of silver.  In order to harness this wealth, collectors must be trained in e-waste management, and East Africa Compliant Recycling (EACR) was created. 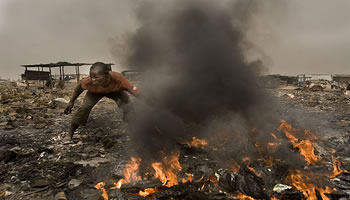 The dangerous process of burning e-waste

Located in Kenya, EACR is setting precedent not only in Africa, but in the world. It makes itself unique in that it recycles the e-waste and sells it back to companies throughout the country. Collectors are put in direct contact with global markets who have a demand for the materials. Transparency is then exercised in making sure the collectors are given a fair price for the waste recycled. The company is located from the the Kenyan capital of Nairobi, but has numerous sites and collection centers peppered throughout the country in places like Kibera, Mukuru, and Eastleigh. Individuals gather the e-waste and sell it to collection centers, each collection center operates as its own independent small business. Inside each collection point is a shipping container, and once full, the content is sold to the main hub where the e-waste will be sustainably processed into material fractions and sold back to the technology industry.  This has enabled the creation of jobs, jobs that that cater almost directly to individuals in slums located a short distance away from e-waste dumping sites. Microfinance is provided as added help for for training e-waste collectors. Funding comes from members of the E-Waste African Alliance. Members include Hewlett-Packard, Dell, Philips, Nokia and Reclaimed Appliances Ltd. They worked closely with the Kenyan government to comply with legislation and frame EACR’s recycling concept. The new legislation comes from Kenya’s National Environmental Management Authority. In the Kenyan constitution the people have a right to a clean and healthy environment. So the Authority has required companies like those of the Alliance to step up their own collection of potentially hazardous e-waste in the country. It is a requirement if the companies wish to continue selling their products in Kenya. The process of “e-cycling”

Economic transformation is impossible if workers cannot read or are locked in low-return activities. SubSaharan Africa has roughly 176 million people ages 15 and older who are illiterate, 44 million of them ages 15−24 are set to be in the labor force for decades according to the African Center for Economic Transformation. What is needed in order to fully utilize the informal sector, in particular the youth, is education. Education in Subsaharan Africa is lacking across the board. Primary enrollments are up, but completion rates are still low, secondary and higher enrollments are very low, and teaching is not geared to science or technology. Vocational, technical, and poly technic education is also underdeveloped along with structured programs for continuing education and on the job training. Studies recognize that early industrialization relies on low and mid-level technicians, educated through technical and vocational institutes, mainly at the secondary level. In South Korea the share of technical-vocational high schools in the 1970s was around 45%. Microfinance has already been implimented by Dell to help women in the slum of Mukuru learn how to correctly collect e-waste and become their own entrepreneurs who control collection points. The private sector has started a system of education that runs in concert with formal employment of the informal sector. It has prompted practical, hands on knowledge and specialization which allows people to learn their trade quickly.

The state’s inefficiencies leave a void that is filled by the private sector. Many in the world’s high income countries like the United States, Canada or the UK take for granted the efficient waste management systems provided by the government. In the developing world modern recycling facilities are still rare. This is why EACR hold such importance. It is a system that has shown progress in Kenya, but is not unique to Kenya. It has the potential to be created across the developing world. Some aspects can even be utilized in developed countries. According to the National Student Campaign Against Homelessness and Hunger, more than 3.5 million people in the U.S experience homelessness each year. 35% of the homeless population are families with children, which is the fastest growing segment of the homeless population. Many homeless in America look to collecting bottles, cans and other recyclables as a source of income. They can receive between $2.50- $50 depending on the size of their hauls. Staff at the collection centers count or weigh the bottles and cans and provide a check for the recyclables’ redemption value. This is how some homeless in the United States can earn up to minimum wage through recycling. Perhaps this system can take a step further where larger companies can microfinance the homeless and unemployed in the training and management of small collection centers around the country, similar to what Dell did with the women of Mukuru. Pillsbury United Communities in Minneapolis, Minnesota has put a part of this strategy into practice. Their Full Cycle Bike Shop offers a six-month, paid internship program for homeless youth whom it employs, trains and supports. The shop teaches them bike repair and hands-on business skills, including resume writing, interviewing skills, sales, customer service and overall professionalism. Full Cycle has had more than 30,000 interactions with homeless youth. In regards to recycling, the homeless, unemployed, and impoverished can play a larger role in a way that plays upon the theme of capitalism. Vocational training and microfinancing can be done by the state or private corporations to place mentally, and physically capable homeless in entrepreneurial positions through the management of small collection points where they then work with other individual collectors. Although the waste management system more efficient in the United States when compared to Kenya, pollution and littering is still high in many urban areas, areas that also hold the most homeless. If the developing world can see potential in its informal sector, why can’t the United States?